It’s been a week or so since you ditched cigarettes and decided to try out vaping. You get out of bed, get the coffee going, reach out for your new e-juice vaporizer — and start coughing the minute you take that first drag.

The vapor from your device hits you weirdly and unexpectedly. Your throat feels like it is dried up completely and instead of pleasure, you only feel pain and discomfort.

And this keeps happening throughout the day. There’s a weight on your lungs. You’re wheezing. There’s mucus everywhere.

What you have is the case of classic vaper’s cough, and I’ll show you have to get rid of it in this very post! But first — are you sure you have the right device? Our new vape juice vaporizer just hit the store, and people are loving it (and they’re not coughing!).

We Built a Vaporizer That Cuts Down On Vape Cough 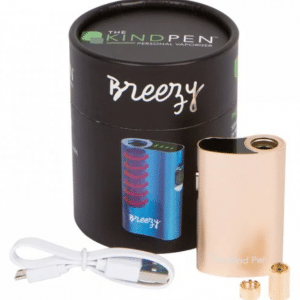 We can’t guarantee zero coughs but we’ve built Breezy with feedback from users.

Get your new e-Juice vaporizer today

NOTE:  What we popularly call vape cough is not dangerous, and it’s not caused specifically by vaping. Rather, it’s caused by you not knowing how to vape correctly. I’ll list several common things that cause vape cough, and tell you what you need to do to fix each and every one of them.

What is Vape Cough?

Vape cough is something that most vapers (especially beginner vapers) face once they get fresh off cigarettes. It’s usually a dry cough that’s caused by vapor not playing well with your throat and lungs.

The drag from a vaping device has a significantly different feel to it than traditional cigarettes and most beginners will cough immensely after taking their first puff.

A survey done by a prominent vaping research blog has shown that more than half (57%) of beginner vapers were coughing when they first started vaping. The most common side effects were dry coughs and a sore throat.

Why Do You Cough When You Vape?

Our bodies react to foreign substances differently. And while vape juice has very little components, a couple of them have been known to cause coughing.

Here’s a brief run-down of everything that might be causing your vape cough:

What Causes Vape Cough & How Can You Fix It? 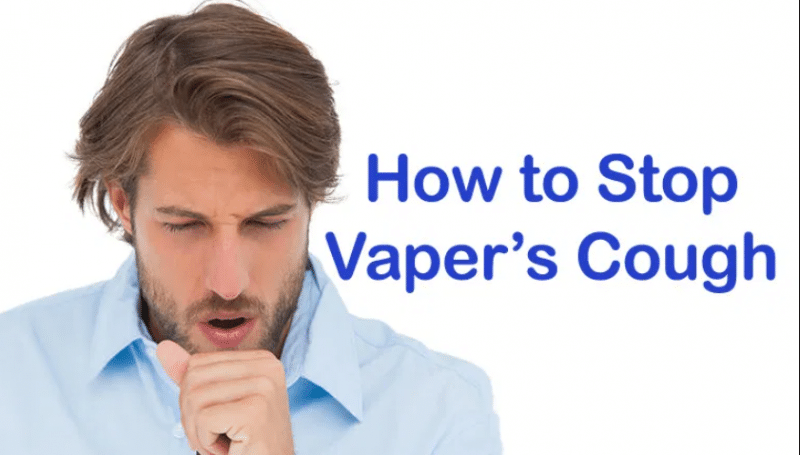 No matter how discomforting and disheartening the coughing from vaping may seem at first, it’s definitely not permanent. In most cases, you can fix it by playing around with your vape juice, altering your vaping technique, or swapping your device for something with less power.

In this section, I’ll let you in on a couple of veteran vape hacks that might make that transition from smoking to vaping a bit easier for you. ake the transition from cigarettes to vaping less painful and uncomfortable for you: 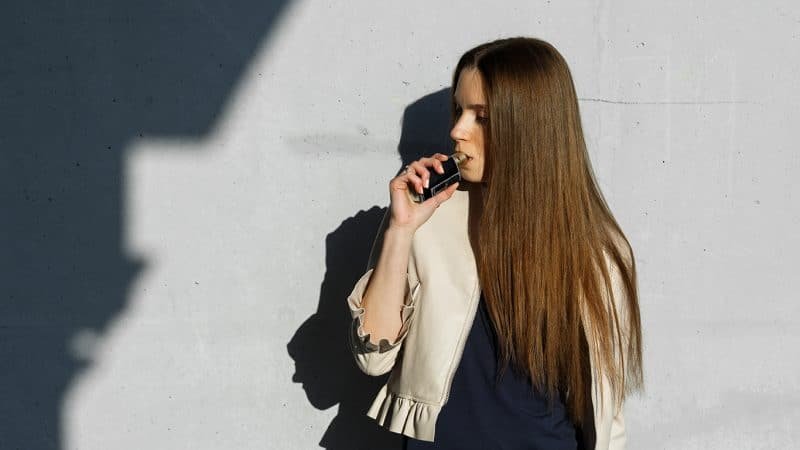 If you’ve done everything from the above list and you still get an occasional cough or two, you might want to take a look at these four quick fixes.

Slow down your inhale

Coughing can sometimes be caused by dehydration from chain vaping. As exciting and cool your new habit is, it is wise to take it down a notch if you find yourself puffing non-stop.

On average, a single coil can last you from 10 days up to a month depending on device, wattage, and type of vape juice. Usually, sweeter dessert type juices tend to wear out coils more quickly. When a coil has reached the end of its life, it produces an unpleasant vape and a burnt taste which is bound to make you cough like crazy. Check that out to see if you need a new coil!

As refreshing and soothing some juices may make you feel, be aware that the vapor from your device can dry out your mouth and lungs if you vape repeatedly for a longer period of time. If you’re a chain vaper, be sure to always have a glass of water standing by.

Just wait it out.

Sometimes, the best thing to do is remain patient and be aware that the vape coughs you are getting are only temporary. The more proficient you become in your inhaling technique and the more accustomed you get to the hit of your chosen vape juice and device, the coughs will fade away and remain a distant memory.

A couple of months from now, you get out of bed, get the coffee going, and reach for your old, faithful vape device. (It’s the Breezy – our state of the art vape juice vaporizer, right? We knew it!)

You take a nice scrumptious drag to satisfy your nicotine craving. It’s all there — the scrumptious taste, big clouds, your morning nicotine hit. The best way to start your day!

But what’s not there is that God-awful vaping cough!

You’re finally rid of it. It’s a thing of the past.

Good on you! No vape should suffer through bouts of debilitating cough as a reward for quitting smoking. And now you’re finally there (and, in small part, thanks to my cool advice here).

If you need any more advice on vaping — from how to deal with unruly devices to which vape juice vaporizer to pick — don’t forget to visit our blog pages. We do our best to publish hard-hitting vape new and vaping tips and tricks there regularly.