Beginner CBD users are confronted with a lot of unknowns from the moment they decide to start vaping CBD oil. Sure, the Internet is full of information but, unfortunately, it’s all still rather unorganized and confusing for bewildered CBD initiates.

That’s why I have decided to take the most basic question and do our best to explain it in simple terms.

What is that question?

Well, it has to do with CBD isolate vs. full spectrum CBD.

I’m sure you’ve seen these terms thrown about while doing your research. The answers might have been slightly confusing, especially since there’s also something called broad spectrum (purified) CBD oil.

Before I address the whole full spectrum CBD vs isolate conundrum, we’re going to have to explore the chemical composition of the cannabis family of plants. This will give you a better understanding of cannabinoids in general, and lay the foundation for our isolate vs full spectrum CBD exploration. The quick and dirty answer, however, lies in the purity of the CBD oil – isolate CBD is pure CBD, and full spectrum contains other cannabinoids, as well as other beneficial compounds.

And when you’re vaping CBD, you definitely want those other beneficial compounds — our stellar CBD vape pens do a bang up job at delivering them quickly and easily.

Looking For a Quick & Efficient Way of Using CBD?

Vaping is the way to go… and our CBD vape pens deliver the best experience on the market. 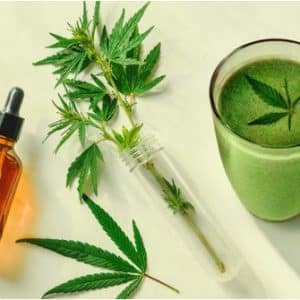 Every cannabis plant is chock-full of different compounds that make it what it is. In some respects, it’s no different than virtually all other plant life.

Let’s take, for example, chlorophyll. It’s a compound found in most plants, and it’s crucial for photosynthesis. Chlorophyll also gives the cannabis plant that nice, lush green color. Then we have the terpenes – another set of different chemical compounds. These are mostly responsible for the flavor and smell of the plant (among other, more ‘planty’ things) but also have numerous health benefits. Flavonoids are also compounds found in numerous plants – in fact, scientists have discovered over 600 different ones so far.

However, the most important group of compounds found in the cannabis genus of plants are cannabinoids. They are the ones that consumers (and scientists) focus on the most because they have extraordinary health benefits. Cannabidiol (CBD) is just one of those cannabinoids. Granted, alongside THC, it’s probably the most explored one, and the most famous one. 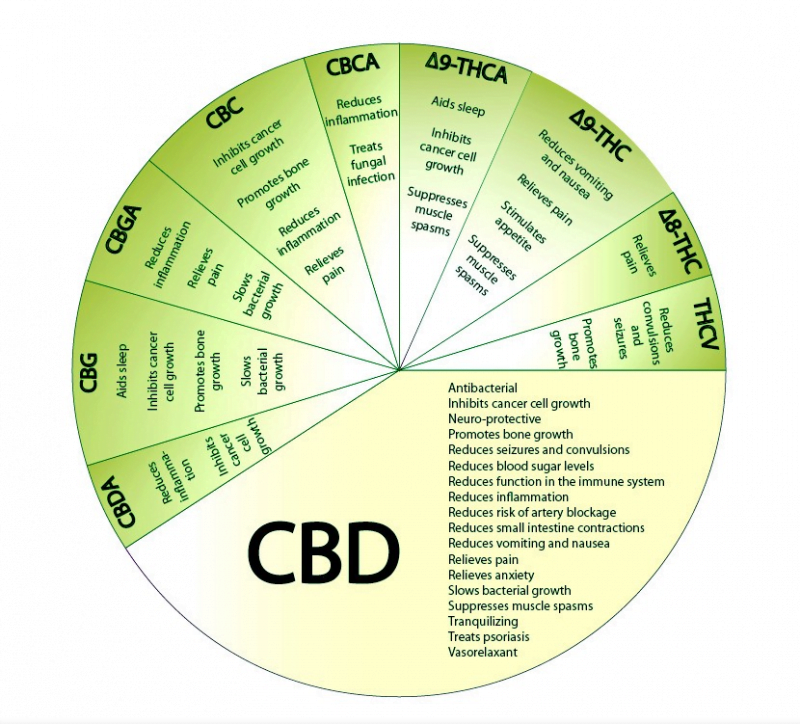 Full Spectrum CBD Oil – Is It Better Than CBD Isolate?

Broadly speaking, full spectrum CBD oil is better than CBD isolate when it comes to the benefits it has. You see, full spectrum means that you’re not only getting the CBD in your tincture or oil – you’re also getting other cannabinoids.

Most of these compounds are pharmacologically active, which means that they interact with the cells and the systems in our body in a positive way. This is especially true for cannabinoids, which interact with the human endocannabinoid system, relieving symptoms of numerous (often painful or chronic) conditions.

But, they don’t just interact with our cells. It’s also believed that they interact with each other, creating an enhanced effect. This effect is known as the Entourage Effect.

There’s a lot of anecdotal evidence that suggests that this effect is real and that it’s more curative than pure CBD. I’ve personally experienced a big difference when using full spectrum CBD as opposed to the CBD isolate. However, we have still to see peer-reviewed scientific studies confirming this.

Last, but not the least, this wholesomeness of full spectrum CBD means that it also contains THC — a psychotropic compound found in all cannabis plants. It’s present in large quantities in marijuana, but traces of it can also be found in hemp. Granted, hemp contains around 0.03% of it (which is around how much can be found in full spectrum oil), but it’s still there.

Hence, the only downside of full spectrum oils is that you can potentially test positive on drug tests. Seeing how some companies still require tests for THC (but don’t distinguish between hemp THC and marijuana THC), it’s obvious why this can be an issue. That’s the main reason why some people opt to go with the less potent and less beneficial (but also, less risky) isolate CBD oil. 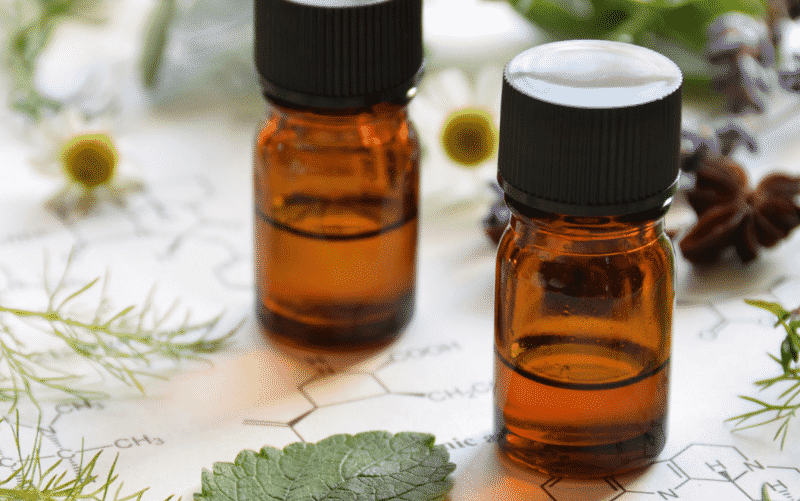 Broad spectrum CBD oils are oils that contain pretty much everything that full spectrum oils do, minus the THC. THC extraction can be achieved through special filtration techniques that remove that particular compound while leaving others intact. Alternatively, broad spectrum oils can be created by starting with CBD isolate and then adding various cannabinoids, terpenes, and flavonoids.

Well-made broad spectrum CBD oils are safe to use and will not show up on any regular drug tests because the compound tested for (THC) is not present in them, However, we urge you to be careful when buying them. They will have varying purity levels and some can contain traces of THC. That’s why it’s important to purchase only those which have been certified by an independent 3rd party organization.

CBD isolate is exactly what it sounds – a product in which CBD has been isolated from all other plant material, resulting in high CBD purity. Once extracted, CBD isolate takes the form of a white powder and it can be used in pretty much anything – tinctures, edibles, and oils. Most commonly, however, it’s added to MCT oil made from the coconut plant. That’s because that particular oil is very hypoallergenic, meaning that just a small percentage of the population is allergic to it.

With CBD isolate, as with the broad spectrum oil, the purity will depend on the extraction process. The more robust the process, the purer the isolate. That’s why, again, it’s important to verify the source from which you’re getting your CBD isolate. The last thing you want is a nasty surprise showing up on the lab test, especially when you’ve forfeited the benefit of full/broad spectrum CBD oils and went with what should be a safer option. Most isolates are 99.9% pure and are safe to use. However, some will be in the range of 99.7% and that small difference can theoretically show up if in your blood work.

CBD Isolate VS Full Spectrum VS Purified CBD – Which Is More Effective?

For a long period of time, it was believed that purified CBD products (CBD isolate), were the best option when it came to cannabis therapy. It makes sense when you take it at face value – CBD is the most researched cannabinoid and, so far, the one that we know has numerous health benefits. Creating a concentrated powder from it to use for therapy just makes sense.

However, a recent study (2015) at the Hebrew University of Jerusalem’s Lautenberg Center for General and Tumor Immunology discovered what we’ve already mentioned –  the Entourage Effect. It’s important to also mention that the university behind the study is the hub of cannabis research – the chemical structure of cannabinoids was first identified there in the 1960ies. In any case, the researchers found that mice that were given full spectrum CBD experience more relief. They also found that full spectrum CBD’s efficiency didn’t drop with an increase in dosage. However, the treatments using isolate CBD had a bell-shaped-dose response. This means that their efficiency would drop if the dosage was increased above a certain point.

Of course, we’re still waiting on other studies that would confirm those findings. However, since then, it’s been generally accepted that in a full spectrum CBD vs isolate CBD brawl, full-spectrum CBD would come out on top.

Although the research looked into full spectrum oil benefits, it’s safe to assume that even the purified oil would be more effective than purely CBD. Still, THC is most likely an important part of the overall equation here, and it’s a shame that the US is still classifying it as a Class 1 substance. Until that is resolved, our recommendation is to go with broad spectrum, THC-free CBD oil, unless you have specific conditions that are best treated with the isolate CBD.

3 Types Of CBD Oil – Which One Should You Use?

This will mostly depend on how you want to use it. Although studies have confirmed that full spectrum CBD is more beneficial, isolate has its uses as well, especially if you get it in its powdered form to use in various edibles.

That said, full spectrum CBD is recommended in most cases, especially if you have severe symptoms.

Full spectrum oil is can provide additional relief if you:

However, if you can’t use full spectrum because you fear drug tests or because it’s illegal in your state (as it still is across the majority of the US), you should take a look at THC-free broad spectrum CBD oil. You will still get a lot of benefits from it, even if there’s no THC inside, and at least reap partial benefits of the Entourage Effect.

I hope this clarifies a relationship between isolate vs. full spectrum CBD vs. broad spectrum CBD. Personally, I can attest to the effectiveness of purified CBD oils and full spectrum oils, but that doesn’t mean that you won’t get at least some benefits from using an isolate powder. They just won’t be so pronounced and you will be missing out on the positive effects of other cannabinoids and compounds.

That said, all three types of these oils work a treat in our CBD vape pens… so give them a try!

I've been a die-hard vaper since 2011 (so!long!ago). I've lost count of devices, e-juices, and herbs I've tried out. Just for the record, I'll try anything once - including oyster-flavored vape juice. When I'm not blowing aerosol into peoples' faces, you'll find me hiking or at the beach (usually in the shade, drinking a mojito).