#bekind and take it EZ 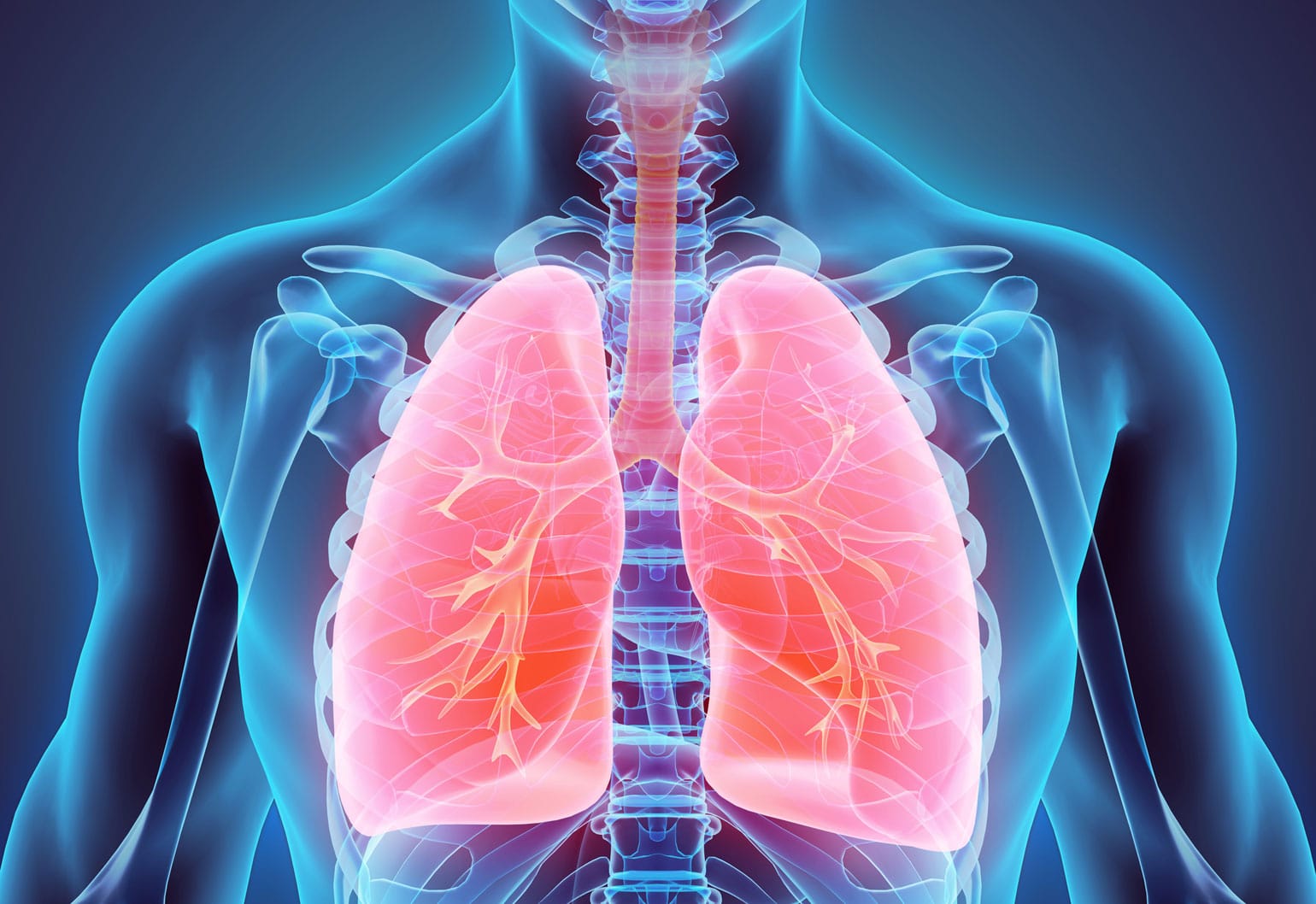 In late August, emergency rooms across the country started admitting patients with severe lung distress and respiratory problems. Most of these patients were young – late teens or early twenties. And they all had one thing in common – they said that they had vaped in the last few days.

Unfortunately, one of the patients – a 30-year-old woman from Illinois – succumbed to her ailment, and 215 cases with the same symptoms have been reported in the meantime. Major news outlets are headlining this as a “vaping lung disease outbreak” or a “lung disease epidemic caused by vaping” with little regard to journalistic integrity (or the truth, for that matter).

The New York Times goes as far as to suggest that we’ve just had a “first vaping-related death”; other news outlets are treating it as a major health crisis (you can check the headlines here, here, and here).

Here’s what you need to know – vaping has not been linked to any serious health problems! Not before and not now. This current spate of emergency room visits is down to people irresponsibly using black market THC cartridges. Let’s repeat that – it’s not vaping, it’s not e-liquids. You have nothing to worry if you’re getting your vape juices and devices from reputable manufacturers. Stay away from the no-name black market stuff and you will be perfectly fine!

Of course, you won’t read any of that in mainstream media – at least not in the first paragraph. The fact that we’re talking about illegal THC cartridges is buried so deep in the text of every one of those articles that it makes you wonder – is there an anti-vaping agenda here? I can’t say that this is done deliberately but it’s certainly encouraged by the FDA and the CDC, which both took more than a week to publicly acknowledge that we’re talking about illegal THC here. Still, all of their advisory messages warn the public to steer clear of vaping, which is irresponsible and dangerous seeing how vaping is helping millions to quit analog cigarettes. Here’s an example of a headline that can be found on the CDC’s website: 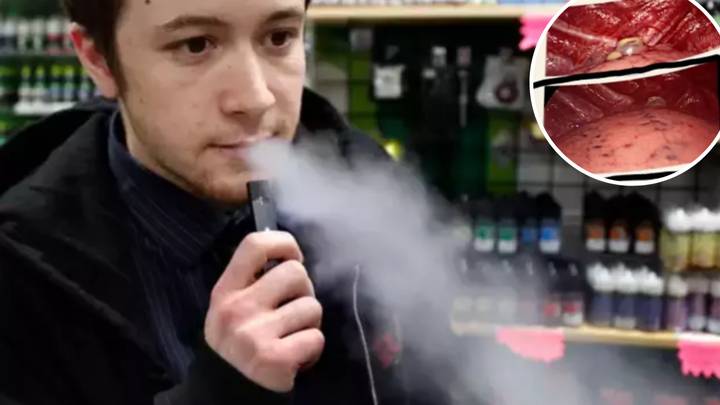 With the CDC framing this as a “vape-related lung disease”, they are telling people that vapes are not safe. They are telling those who are looking to quit smoking that they are better off inhaling smoke than switching to quality vape juices.

And that is simply not true.

Most people associate vaping with e-liquids and juices. They don’t even think about THC or CBD that gets vaped. And, because those two substances are illegal in a lot of US states, the practice of doing it is that much more dangerous because they are generally obtained on the black market. We have no idea what’s in there.

Connecting what’s happening right now with regular vaping (with e-liquids), calling it a vape-related lung disease, and telling people to quit vaping is similar to warning people that eating causes E.coli infections when, in fact, we’re talking about one batch of contaminated lettuce. Where is the sense in that?

After several days, the director of FDA went on record (via his Twitter account) to clarify that all cases are linked to illegal THC cartridges. 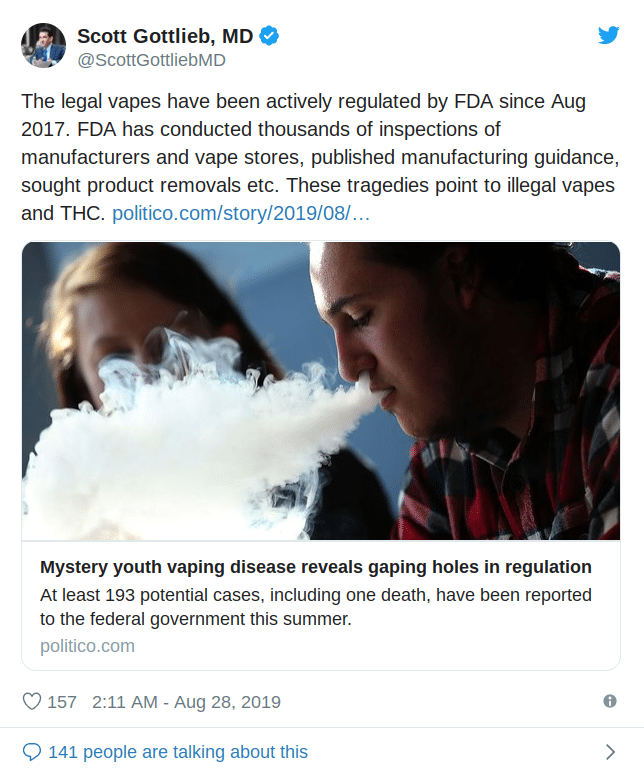 That said, the genie is out of the bottle and the concerned public is still blaming e-cigarettes as the cause of this. The mainstream media, for some reason, is reluctant to go on record or to edit old articles to unequivocally state the same. Here’s a Twitter post from Laura Helmuth, the health and science editor at the Washington Post, warning people to quit vaping e-juice days after it became clear that vaping had nothing to do with this. 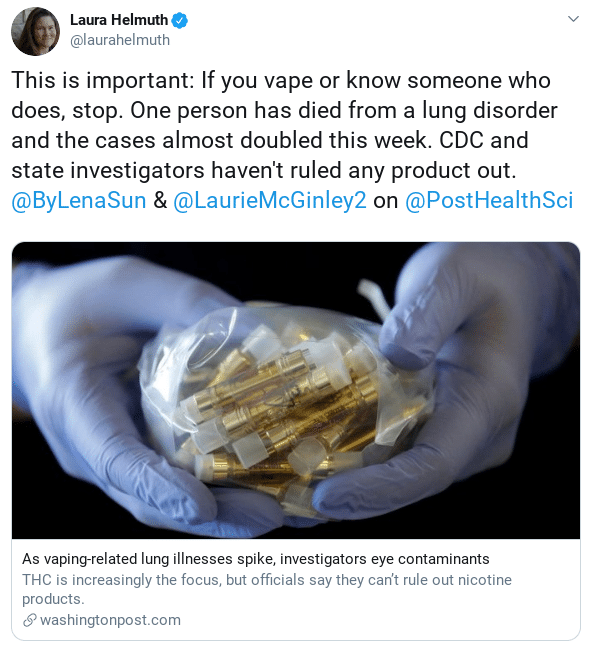 Is that responsible, fact-based journalism? I think not.

We’ve already mentioned that this seems to be connected to illegal THC cartridges that can be found on every black market in the United States. In fact, all the reported cases come from those states that have very tight and unyielding bans on THC and CBD. This THC is not actually THC – it’s a synthetic cannabinoid that has been artificially created, and is often much more potent than the original. On street corners, it’s sold as K2 or Spice. However, we still do not know for certain, as both the FDA and the CDC are currently running more tests to identify the ingredients of a liquid provided by one of the patients. 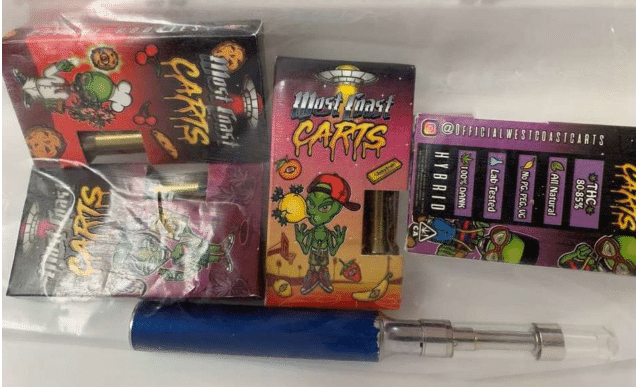 But, there might be more to the story. Spice is known to cause severe lung issues but is usually smoked, not vaped. While it still might be a part of this problem, it’s more likely that the pre-filled cartridges vaped by almost all the patients have been tainted in some way. Leafly did a great article on it a few days ago, listing all the possible causes of this health scare. You can read more about it by visiting their website but we’ll list some of the major concerns below.

Traces of pesticides and heavy metals have been popping up in lab tests done on illegal THC and CBD oils for years. Both of these can cause serious health issues, including respiratory problems that we’re seeing right now. However, this has been going on for years now and we never had such large outbreaks happening simultaneously. What could be the case is that all the batches that were sold to these patients had unusually high amounts of these chemicals inside them and that they triggered such an adverse reaction.

New Cutting Agents Are Being Used

All THC and CBD oils need to be “cut” with something – they need a suspension liquid in which to dissolve. Traditionally, manufacturers have been using propylene glycol, vegetable glycerin, or MCT oil. These liquids are not perfect but they do not cause the health issues we are witnessing in these cases. On the other hand, black market peddlers started using new, cheaper cutting agents back in 2018. These new cutting agents are thick and odorless but their formula is mostly proprietary, which means that we have no idea what’s inside them.

Black market THC and CBD oil manufacturers can put pretty much whatever they want in their product. They create a vapable concoction, order empty cartridges, fill them with that, and they are good to go. Most times, they do just that – they add diluents and terpenes to their products which have not been tested on humans. Furthermore, we have no idea how some of those ingredients react to heat – getting them up to 385°F might just be what’s causing all of this.

These are just some of the ideas that leading vape researchers and medical experts looking into this are considering. The fact is, we still don’t know what caused these people to get ill but this is clearly not a “vaping lung epidemic” as it is being called. If anything, it’s an epidemic caused by overly restrictive cannabis laws that are incentivizing the existence of an unregulated black market for these types of products.

Symptoms Are Similar to Mineral Poisoning (& Some Other Diseases) 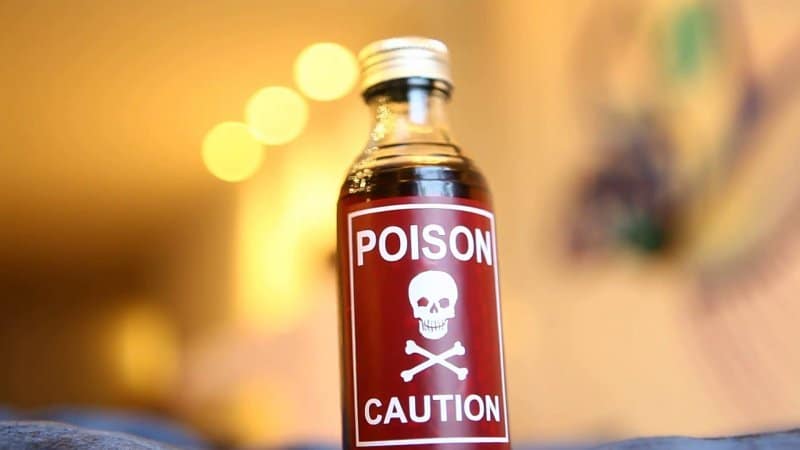 Because we have no idea what’s in the solutions that these people have been vaping on, the community has centered on investigating diluents as the most probable cause of their respiratory issues. Some commentators on vape forums (as well as some medical experts, such as Dr. John E. Parker), suspect mineral poisoning, which has similar symptoms.

Dr. Parker also says that: “there are at least three distinct manifestations of vaping-associated pulmonary injury: lipoid pneumonia, cryptogenic organizing pneumonia, and alveolar hemorrhage syndrome. For me, the main importance of that finding is that it suggests the immune system is being revved up.”

While he (unfortunately) cites vaping as the cause, it’s very clear from his statement that vaping is just a method through which toxins were introduced into the system of these people. Vaping itself is not the cause – it’s whatever manufacturers put in those illegal “pot oil” cartridges. Until we start looking into that, I can only speculate that this type of thing will continue to happen in the future. And what I can pray for is that we don’t see any more fatalities.

Protect Yourself – Buy Only From Reputable Manufacturers

If there’s one thing that I want to hammer home here is this – if you’re vaping on e-liquids from reputed manufacturers, you mostly have nothing to worry about. Despite this being touted as a vaping-related lung illness, the fact is that this has nothing to do with vaping.

It only has to do with inhaling unknown and poisonous substances into your lungs – a vape pen is just a mode of administration but it could have just as easily been a bong or something else.

If you’re partial to using CBD or THC oils, the same rule applies – do not vape on something that you bought on a street corner! This is not where you want to be pinching pennies. Buy CBD and THC oils from those manufacturers that you trust, and that can provide you with lab results that have been 3rd party verified! Here at the Kind Pen, we take your health seriously – so should you!

Also, don’t forget to educate people about vaping – the authorities won’t do it, and the media won’t do it. It’s up to us to tell the truth and to educate smokers about safe and legal cessation options that they have at their disposal!